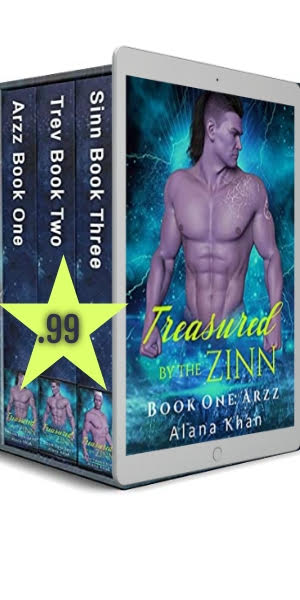 The Complete Treasured by the Zinn Series in One Boxed Set! 3 Standalone Alien Romances!

Arzz risks the death penalty when he abducts Spirit Freedom. He had every intention of returning her home unharmed at the end of the 14-day Quest. Will love interfere and demolish all his good intentions?

Arzz
My government betrayed me, stealing the one thing I wanted—a chance to take an Earth female for fourteen days to court her and make her mine. I take matters into my own hands with every intention of sending her home and accepting my punishment at the end of two weeks. I never dreamed my little Earther would be so much more than I bargained for.

Spirit Freedom
There’s a reason I chose this ridiculous name—it was my pledge to myself that no one would ever control me again. At least that’s what I thought before huge, purple, gorgeous Arzz from Zinn stole me from my home, took control, and piloted me on a magical tour of the galaxy. Nothing is as it seems from the first moment we meet, and the more I know him the less I want to return to Earth.
But he’s in trouble with his government, and my happiness is their bargaining chip.

The rules are clear. The stakes are high. Can the planet’s ranking general relinquish a lifetime of service to find true love with a forbidden female?

General Arrenn Trevanian
She’s all I’ve ever wanted, and so easy to love. This Earth female is taboo. Untouchable. For one hundred days I’m responsible for her care while I secure her a suitable mate. How can I send her into the arms of another when she’s mine?

Emily Jane Jackson
Not only did he save my life, he’s also the most honorable male I’ve ever known. Which is the problem. Will he put his principles and love of country ahead of his feelings for me?

Follow Trev and Em in their travels across the galaxy. They conquer raging fires and frigid waters as they battle their feelings for each other.

Sinn risked everything when he broke Zinn law to travel to Earth. He had no intention of encountering any humans—he just wanted to explore a mysterious cave system in the River of No Return wilderness. He never expected to meet the Earth female of his dreams.

Dakota
The desire to go on a Vision Quest haunted me for years. I wanted to develop survival skills and discover my purpose in life. I never expected to meet the sexy-as-Sinn purple Zinn who ticked all the right boxes and was the male I’d hungered for my entire life.

Sinn
Denied a human female, I’ve been driven to prove my theory that humans and Zinns evolved from an ancient civilization of benevolent aliens. My trip was supposed to be a quick journey to the bowels of a cave system in a remote Earth wilderness area. Fate had other ideas when I transported straight into the arms of the most beautiful female I’d ever seen. I thought I was the luckiest male alive when she showed no fear and welcomed me into her bedroll. Why is it that my good luck always turns bad?

Will Dakota and Sinn find love on their explorations? Join them on their quest for alien civilizations, as they search to uncover the secrets of the universe while they journey across the galaxy.

These standalone books written by bestselling author Alana Khan promise a guaranteed happily ever after with no cheating. Mild Dominant/ submissive themes.