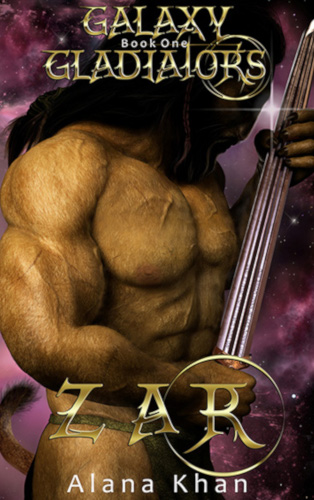 Kidnapped from Earth, then forced aboard a slave ship, Anya is tossed into a cell with Zar, a handsome half-lion gladiator. They’re given the choice to breed or be killed. Will they be able to overcome their disastrous beginnings and find love among the stars?
Buy Now 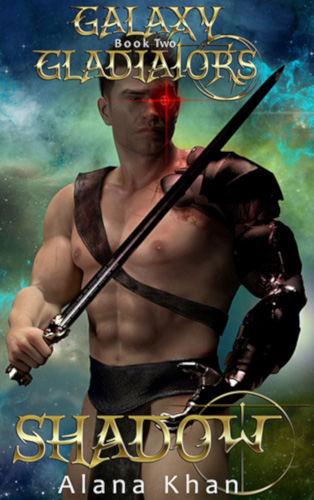 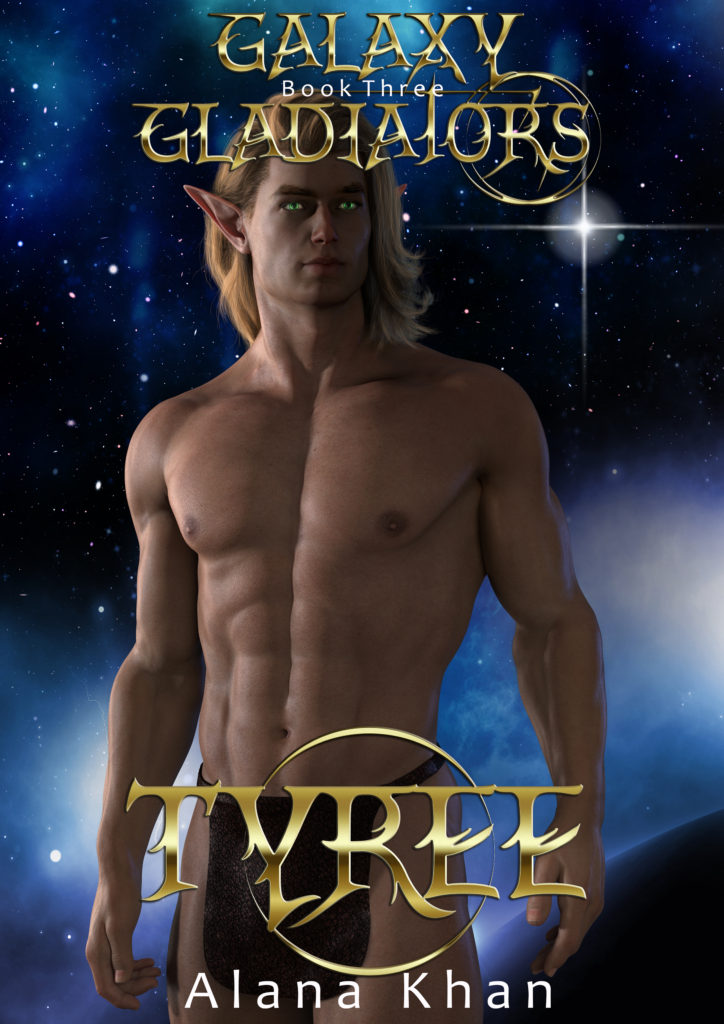 Can love be the transformation they need to survive?

Surviving a horrifying alien abduction and dangerous slave revolt, Grace thought she was finally safe on this spaceship full of protective alien gladiators. Until her musical improvisations accidentally go viral. Now she needs to overcome her crippling stage fright or it could mean death for them all.
Buy Now 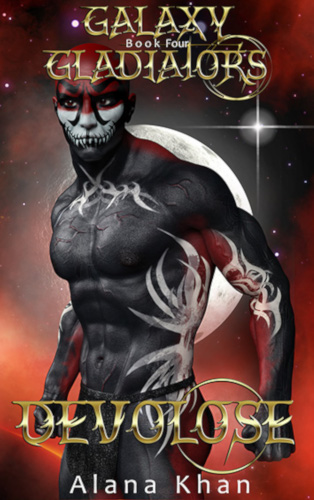 Her friends say he’s the devil. But he might be her savior. Devolose and Tawny have been rescued after three years together in the emperor’s dungeon. Every day he was forced to inflict pain on the Earth woman he only wanted to protect. How could he not develop feelings for her when they’re connected in so many ways? 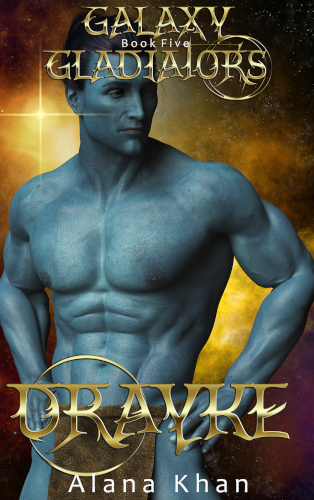 The battle is on, for the Three Gates, and her heart.

Abducted from Earth and forced to become a gladiator, Nova resigns herself to a short, loveless life. But after being injured in the arena, she meets Drayke, the hunky blue alien doctor, who informs her they’ve already bonded.

And he has a secret. One that could change everything. Now they’re in a fight, not just to open the Three Gates, but for her heart. And the stakes are high. Life, death, and love. 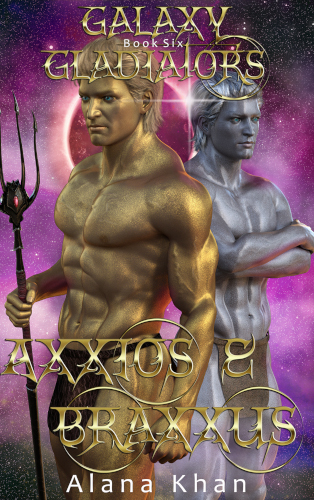 Their chemistry is off the charts. But Axx can’t feel love. 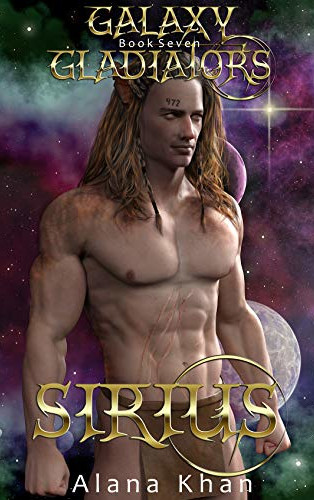 Can this genetic “Product” of the Federation and the isolated Earth female who rescues him transcend their barriers and learn to love?
Buy Now 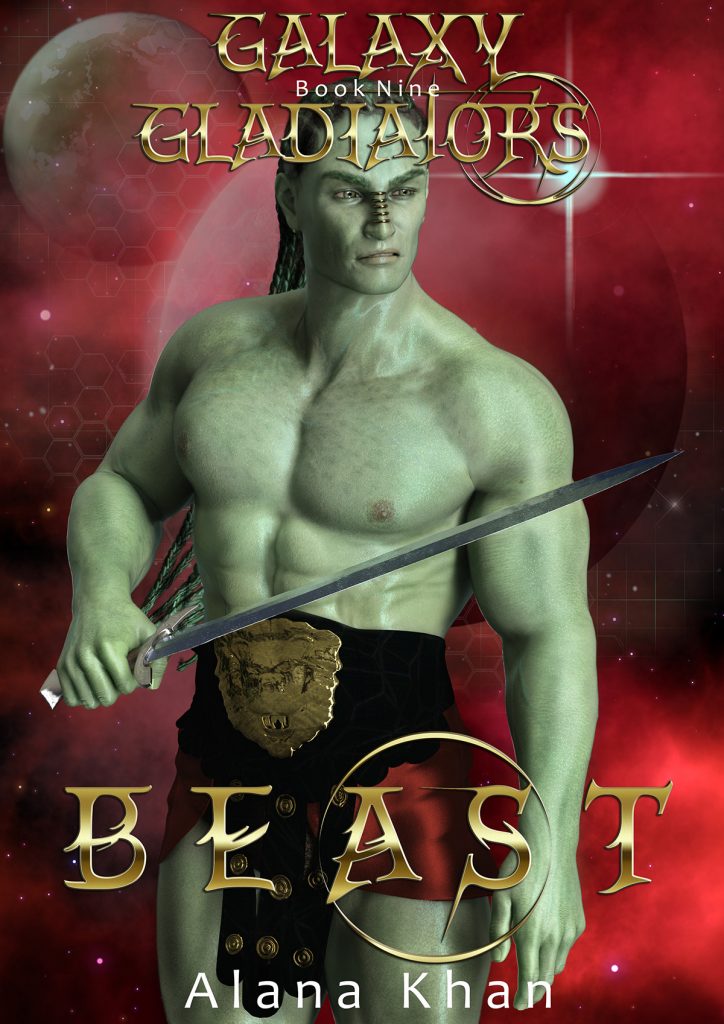 The Beast of Tramachor is one of only ten Pinnacle Gladiators in the galaxy. Having pissed off his owner, he’s being transported to the auction house when newly-abducted Aerie Evans is tossed into his cell in the middle of an epic space battle. Although neither of them is looking for love, what happens when it comes hurtling at them at warp speed?
Buy Now 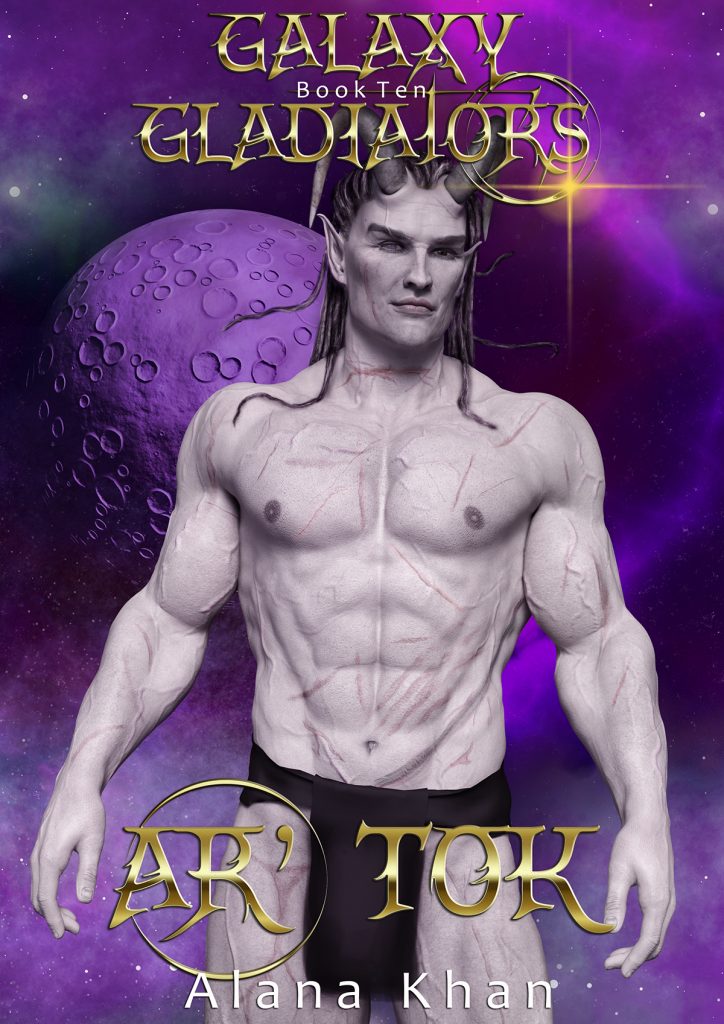 The Galaxy Gladiators recently rescued Ar’Tok from a life of enforced servitude. While learning comms to earn his keep, he accidentally stumbled into secret nightly communications with a mysterious female named Star.

Although they develop emotional and sensual intimacy during their talks, Ar’Tok never dreamed they’d meet in person. How will she react when the male she meets looks nothing like the attractive pictures of his race she’s been crushing on for months?

I’ve been completely alone on this satellite since my parents died four years ago. I’m human—an illegal—there’s no safe harbor for me anywhere in the galaxy. I hadn’t allowed myself to acknowledge my soul-crushing isolation until my nightly conversations with Ar’Tok allowed me to connect with another living being for the first time in years. When my oxygenator malfunctions, he races halfway across the sector to rescue me. Although he looks nothing like I expected, it’s not his appearance that’s the problem.

Since she didn’t recoil at my scarred face and body, Star will surely hate me when she learns of my shameful past. Not even the gladiators know the truth. Maybe a miracle will happen when we share Blessed Peace Week together on the infamous Pleasure Planet.

Join Star and Ar’Tok on their journey to Paragon during the happy holiday. In addition to the drama, excitement, and passion you’ve come to expect from an Alana Khan book, you’ll have lots of fun adventures and laughter as you travel with this couple and the entire crew. This standalone book by Pinnacle Award Winning, bestselling author Alana Khan has no cheating, no cliffhangers, and a guaranteed happily ever after. 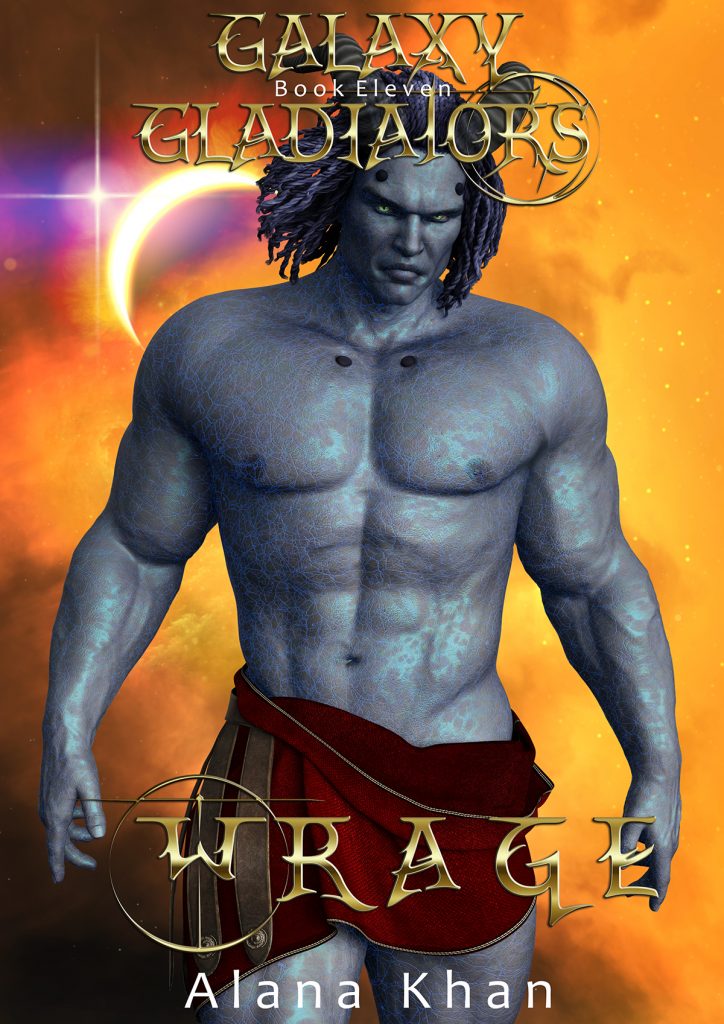 Elyse is convinced only drunkards and children tell the truth and believes the insults Wrage hurled at her were unforgivable. Except no one told him the local brew was ten times more potent to his race than any other. Their relationship is forged on this major blunder and doesn’t get any better when Elyse agrees to be legally mated to earn her freedom and doesn’t learn that divorce isn’t allowed until after the branding ceremony. With a beginning like this, how can a sexy alien and sassy human not fall in love?

Okay, I’ll admit, his angsty attitude doesn’t diminish his white-hot appeal. And since our catastrophic introduction he’s done everything but get down on his knees and apologize–oh yeah, that comes later and . . . wow, that apology was hot enough to melt titanium. At any rate, even if I’m falling for the male who’s already my mate, we need to keep our hands to ourselves, right? I mean why let emotions get in the way when we’re mandated by law to stay together forever?

I’m the first to admit we got off to a rocky start, but she was the one who was sober when the officiant branded us during our mating ceremony. I find her beautiful, though, and when she lets down her protective walls, how can I help but fall for her?

This enemies to lovers standalone in the Galaxy Gladiators series has everything–action, fighting, near-death experiences, and climaxes. Yeah, lots and lots of climaxes. Alana thinks this is her most romantic book thus far, even if these two have a rough beginning.

Wrage has flying camels, a reptilian villain, and dancing in the stars–really. As well as cool vocal licks, a virtual trip to the Copacabana, and of course an evil parent thrown in to round out the trials and tribulations Alana throws at these two deserving souls before they get their guaranteed happily ever after.

If you like handsome alien males with a knack for heroism, and females who save the day more than once, you’ll love Wrage. This standalone book has no cheating, no cliffhangers, and a guaranteed happily ever after. 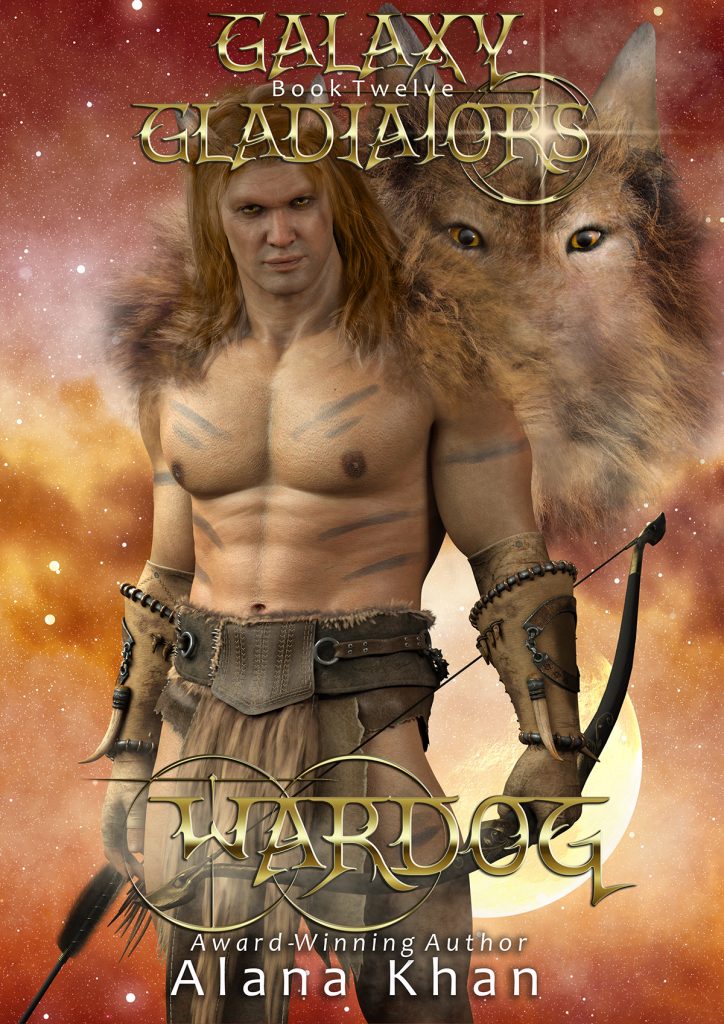 Mortifying! How else would you describe living with an adopted two-hundred-pound fighting canine for months only to discover there was a sentient male inside? A gorgeous male with a perfect body who would be only too happy to ‘ease’ your every need. Needs he is intimately acquainted with because he watched you take care of them yourself for three months.

When I was thrown into a cell with a humongous fighting canine with two-inch-long fangs I was terrified. WarDog had other ideas, though. He nudged my hand for cuddles, nuzzled my neck, and demanded kisses, so of course we became best buddies. After he shifted to his humanoid form, though, being buddies was the furthest thing from my mind. He’s handsome, passionate, and makes no secret of his attraction. Although we haven’t even had a conversation yet, he knows my secrets. Every. Single. One.

I ached to claim the beautiful brown-haired Earther from the moment I returned to my humanoid form. She’s compassionate, kind, and tender. Not only do I need to conquer the hurdle of our awkward beginning, there’s the little detail of my mortal enemy to deal with. He destroyed my village, killed my pack, and locked me in my canine form for a decade. Must I make a choice between exacting revenge and seizing love?

This standalone in the Galaxy Gladiators series has everything you’ve come to expect from bestselling author Alana Khan–action, fighting, revenge, and climaxes. We’re all in it for the climaxes, right?

If you like handsome heroic alien males and strong females who find their purpose, you’ll love WarDog. This standalone book has no cheating, no cliffhangers, and a guaranteed happily ever after. Warning: It contains graphic sex and violence. 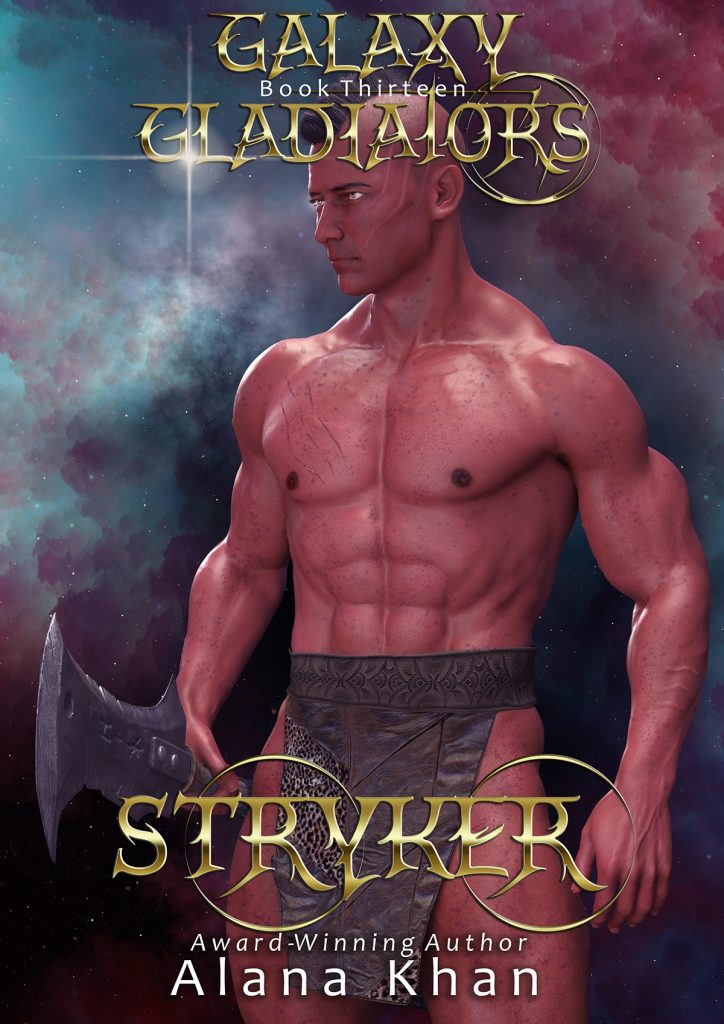 Not all scars are visible.

It’s been over a year since Stryker and Maddie were thrown into a cell and forced to mate upon threat of death. They and their fellow captives rebelled and commandeered their slave ship to begin new lives as free males and females. Many of their friends have mated and now walk the halls of the ship freely demonstrating how deeply in love they are. Why are Maddie and Stryker still enduring an uneasy truce as they share friends-with-benefits status?

Maddie was traumatized the day our owners tossed her into my cell. In the face of my discomfort and her terror, I managed to see her courage and strength. I fell in love with her that day and have remained by her side as much as she’ll allow. I think she knows how I feel. Why won’t she let down her barriers and allow me in?

He’s the finest male I’ve ever known—kind, caring, and gentle despite his size. That’s why I keep him at arms’ length. Soon my depression is going to return with the force of a tsunami. I don’t want to hurt him any more than I already have. Besides, how can anyone love me when there are days I struggle just to get out of bed?

Publisher’s Note: This standalone 20K word novella deals with the powerful theme of depression. Best-selling, Pinnacle award-winning author Alana Khan was a psychotherapist before she began her writing career. She deals with this difficult theme with sensitivity, however dark emotions, as well as explicit sex scenes, are portrayed in this book.

You are guaranteed a true love story with a supportive hero and struggling female. You’ll find no cheating and a happy ever after, but, alas, no magical cures. 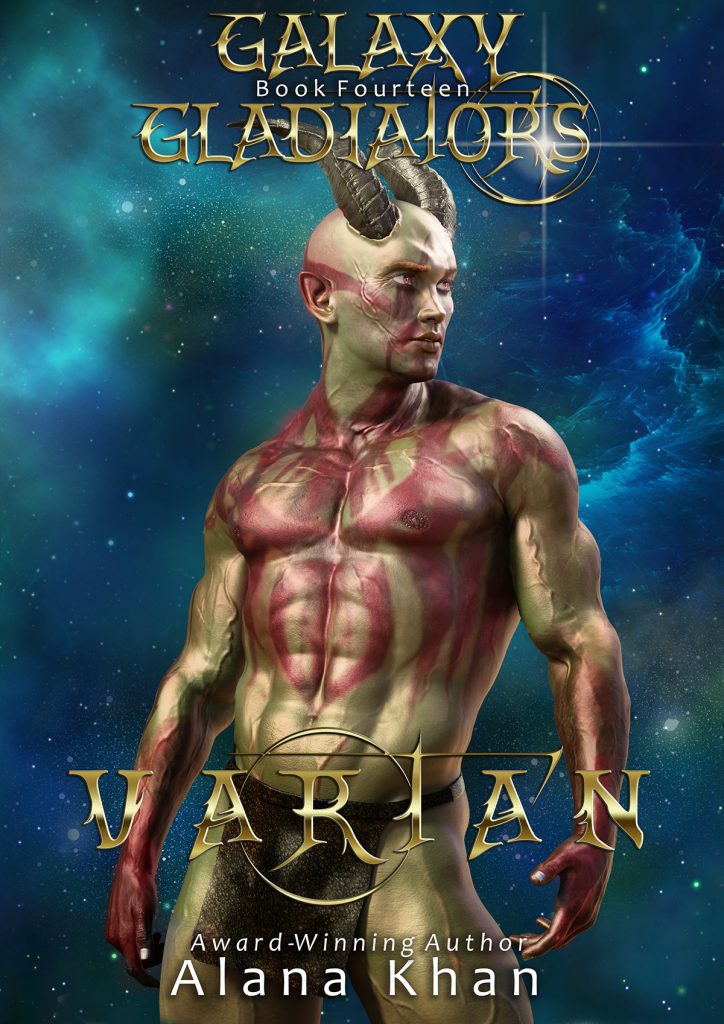 Born in space. Raised as a pet.

I’ve never worn clothes, held a fork, or made a decision in my life. When my old master dies, I’m put up for auction and sold to the highest bidder. I expected my life to continue in the way it had always been—kneeling at my master’s feet—but instead, I’m told I’m now free.

I should feel grateful, but I’m terrified. Pleasing him becomes my new desire. If I’m good enough, maybe he’ll decide to keep me. Over time one thing becomes clear, I’m starting to crave this male.

I now have a burning desire for something more than freedom. Can I find the courage to ask for what I want for the first time in my life?

My quest in life is liberating slaves. When I see a human female up for auction, I purchase her in order to set her free. Imagine my surprise when she doesn’t want freedom but requests to stay with me instead.

Through my ignorance I destroy things between us, but I can’t let her go. To make amends I vow to help her discover herself and unlock her deepest desires.

I’m starting to crave this female. How can I let her go when I know it’s our destiny to share our heart connection?

This standalone in the Galaxy Gladiators series has everything you’ve come to expect from bestselling author Alana Khan—action, fighting, and sensual love scenes.

If you like hot heroic alien males and strong human females who find their purpose, you’ll love Vartan. This book has no cheating, no cliffhangers, and a guaranteed happily ever after. Warning: It contains graphic sex and violence. 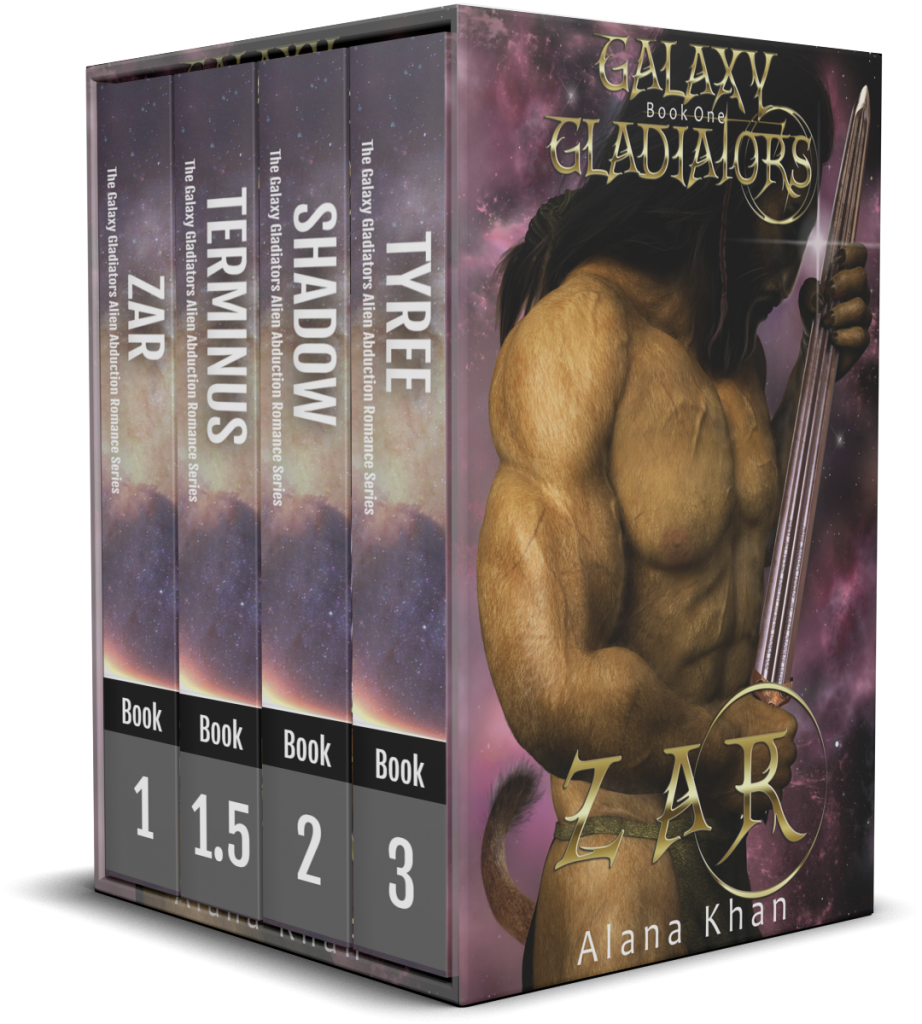 So many hot alpha gladiators, so little time!

Ten human women are abducted to be sold into sexual slavery. They’re each thrown into the cell of an alien gladiator on their way to the auction block.

Find out how this ragtag bunch of slaves overthrow their captors and find love in the first three books of the series PLUS a bonus novella about Shadow’s backstory.